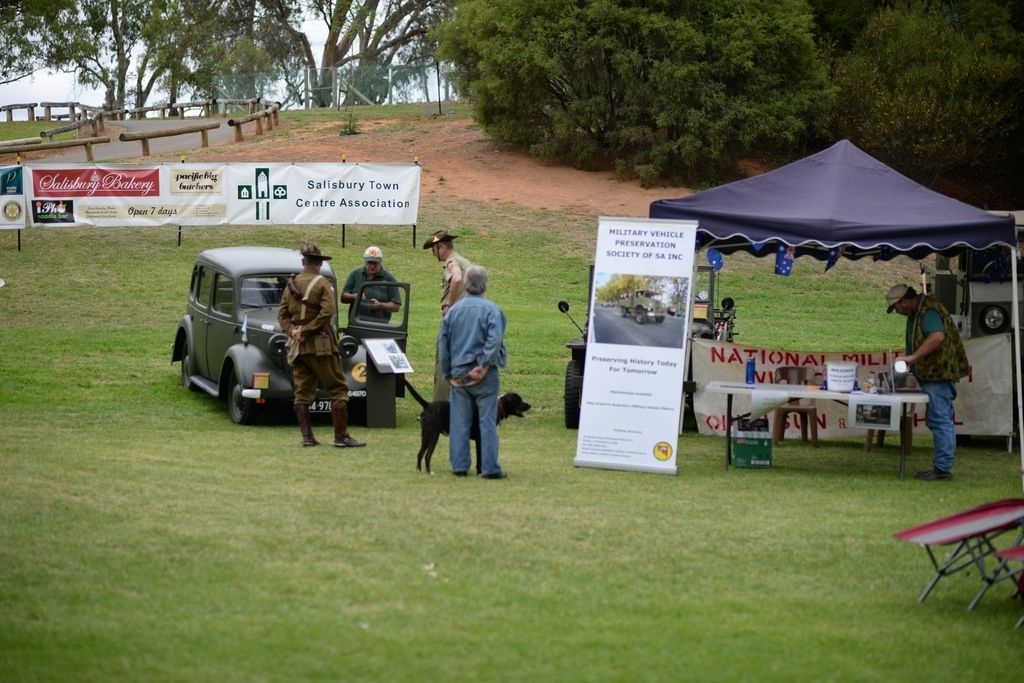 Following on from an early start on Sunday, for the Wanderers Australia Day Birthday Party, there was another very early start on Monday for the Salisbury Australia Day Family Picnic, held at Carisbrooke Reserve. The vehicles needed to be in place by around 07:30, for safety reasons.

Meeting at the museum, Grant’s GMC, Terry’s Saracen, the museum’s C15A “Koop” Blitz, and Ford Gun Tractor departed in convoy and made their way along the short drive to the reserve. While acting as Commander in the Saracen, Mike took some footage of the vehicles, which is unfortunately a little shaky.

When we arrived at the reserve, we realised that we had turned up at the wrong entrance, and had to do a couple of U-turns on Main North Road to make our way around to the side entrance. Who would have guessed that a Saracen has a better turning circle than a GMC CCKW?

At the reserve, we then met up with Russell with his Austin, and Sam with his Jeep and set up our display on a good spot on the hill. John arrived sometime later in his Jeep, and was again wearing his WW1 Light Horse uniform.

We enjoyed the free breakfast while, unfortunately, the Air Cadets set up their display in front of us, partially screening us off from the rest of the already growing crowd.

The Nine Mile Snipers flawlessly performed their first firing of the day, 3 rounds, at 09:25, prior to the raising of the Australian Flag and the National Anthem.

It was a great day, with perfect weather, a good crowd, food and entertainment. The sideshows and displays from other clubs received lots of attention and we were inundated with interested members of the public wanting to inspect our vehicles and talk to us about them. We handed out over 800 flyers during the day.

The Gun Crew’s second firing, at 13:00, 4 rounds, also went flawlessly, although it was a bit hectic in the middle as the MC had the crowd start counting down for the third shot, requiring the team to load in double-time, but they did make it in time.

We made some good contacts on the day, sold some merchandise from our display and raised some donations.

The trip back to the museum was a little problematic, as the Gun Tractor broke down on the rather steep climb out of the reserve (possibly due to fuel starvation), blocking a rather narrow pathway that was backed up with trucks – of course it was the lead vehicle and had the rest of us blocked in with it. After some tricky shuffling, we managed to get some other vehicles around it and tow it back on to the flat, where we were able to get it started again. The gun tractor has been putting in some significant mileage over the last few years and is due for some much needed TLC, including swapping the tired engine over for a freshly rebuilt Ford V8.

We would like to express thanks to the Rotary Club of Salisbury and the Salisbury City Council for inviting us to this event. We had a great time and look forward to attending again next year. 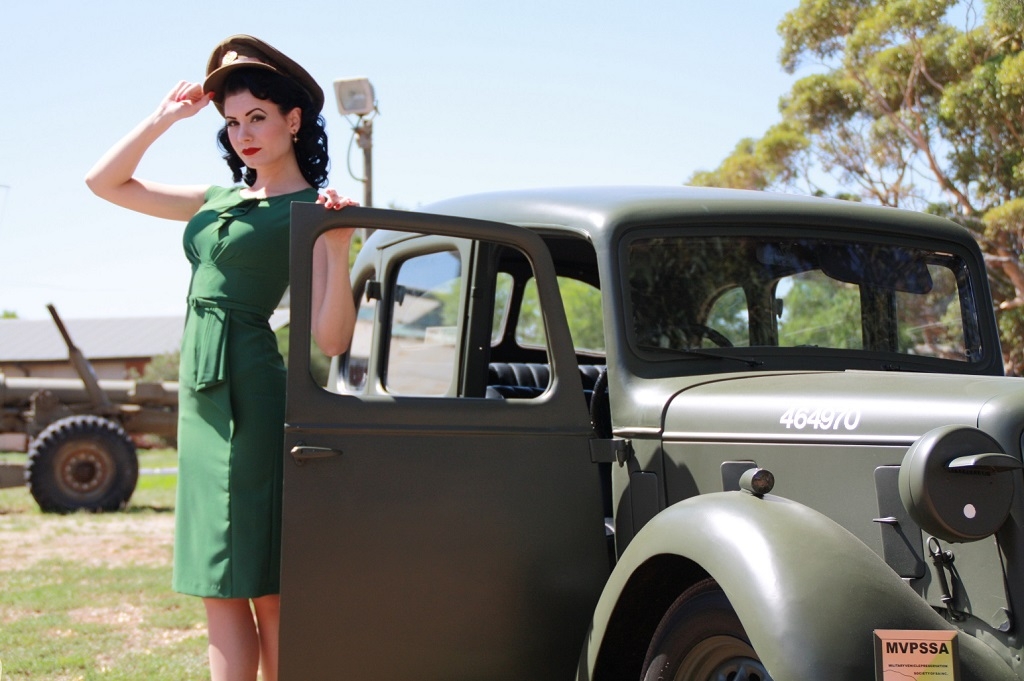 Tuesday afternoon, we had a flying visit from US model Brittany Jean. Brittany also provides care packages and supports various US and foreign military veteran organisations including Soldier On (Australia and UK) and many others through Vixens 4 Veterans. This organisation raises money for veterans with PTSD.

Brittany arrived a little after 15:30, with her photographer, and Kevin Noel from the Wanderers Rock and Roll car club. Kevin arranged the quick unscheduled visit while Brittany was in Adelaide for her flying four day visit before heading to Brisbane then back to the US.

Brittany had a few photos with the Stuart Tank, Dave’s GPA, the North South Ford, Searchlight and Russell’s Austin. She was all done in a little over an hour!

Keep an eye out on Brittany’s Facebook page with details of her visit to the museum. 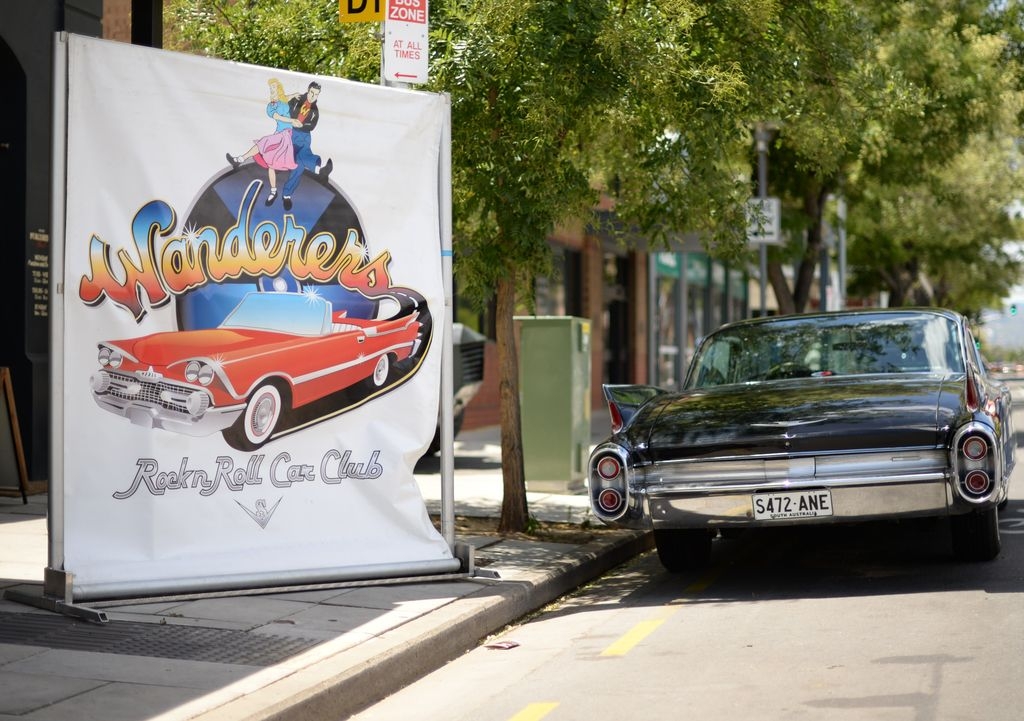 An early start on Sunday had Terry, Russell, Mike and Thomas arriving at the museum at around 07:30 to do some final preparations on the Saracen, including fitting an impressively large Australian Flag on a pole into the turret, and departing a little after 08:00 to head to the city, in support of the Wanderers Australia Day Birthday Party event.

We pulled the Saracen into the carpark at McDonalds Enfiled, for breakfast, and to meet John with his Jeep, where we got lots of attention. The rest of the drive to the city was fairly uneventful, although there were some traffic controls in place for the final stage of the Tour Down Under, which had to be negotiated.

We arrived corner of Franklin and Cannon Streets Adelaide at around 09:15, where the Saracen formed a road block on the corner and John’s Jeep was put in with the car show in the Legacy car park. John, as usual, was sporting his dashing WW1 Light Horse uniform. Exactly how he manages to drive with those spurs on, none of us have managed to work out, so far. The event made use of Cannon Street, for stalls, the Legacy car park, for the cars, and the Published ArtHouse for the indoor entertainment and bar. This arrangement made for an excellent venue for this kind of event and there was something for everyone with a car show, stalls, food, drinks, music, barber shop, tattoo studio, fashion contests and a burlesque show. While the event was a little different to what we normally attend, we enjoyed it immensely and were made to feel welcome by all the participants.

The US pinup sensation, Brittany Jean, attended the event, and she also made a flying visit to the museum on Tuesday, where she had a brief photo shoot.

The event was very successful with lots of people in the ArtHouse and the vehicles and stalls getting lots of attention. The planned events were scheduled to go late into the night. Unfortunately, we couldn’t stay for the later concerts and the highly anticipated burlesque show, and we departed the city at about 16:00 to make the return journey to the museum and to get ready for the Salisbury Australia Day Picnic at Carisbrooke Park the next day. 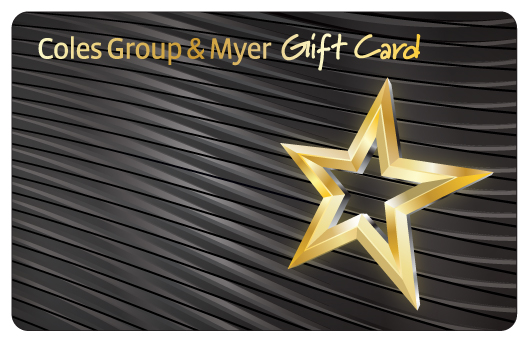 This competition is now complete, and our winner is Luke Nielsen. Luke, please contact us to arrange delivery of your prize. Many thanks to everyone that entered.

The National Military Vehicle Museum recently offered free entry to the museum for children under 15 during the school holidays, and we were blown away by the positive response from the community – so much so that we have decided to continue offering free entry for children on an ongoing basis. For details of our revised pricing structure, see our homepage.

To help us get the word out about this change to our pricing, we are running a Facebook competition with the prize being a $50 Coles Myer gift card.

The competition is open until the 28th of February, 2015, and will be drawn on the 1st of March. 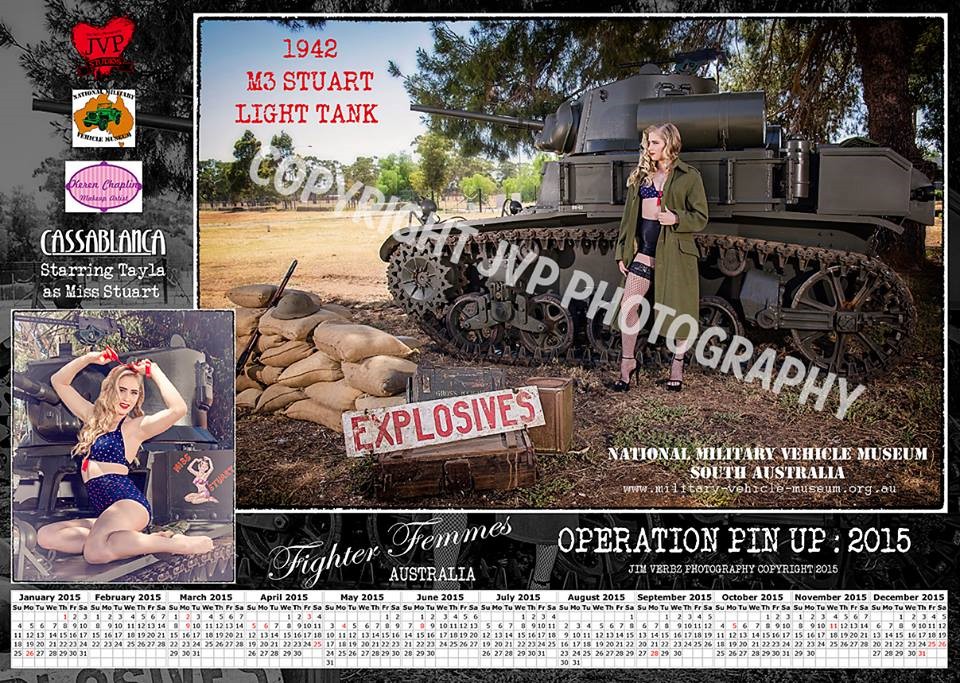 Our calendar for 2015 is now available and is in the form of a single A3 sheet printed in full colour on photo quality paper. They cost $10 each, with $5 going towards the museum building fund (a great cause!) and the remainder going towards production costs.

It has been produced by Jim Verbz Photography and features our 1942 M3 Stuart tank and the lovely Tayla, as “Miss Stuart”.

The calendar is available at the museum shop during open hours, at our monthly Committee and General Meetings and also via post, by contacting our secretary, Russell, via email. Postal orders attract a flat $10 postage fee, for up to 5 calendars.

We know that it can be hard to find affordable things to do with the kids during the school holidays and that’s why we are offering free entry to the museum for kids under 15, when accompanied by an adult.

The offer is valid is valid for the rest of the Christmas holiday season, with the museum being open on the following dates:

The fine print:
This offer is only valid on the dates listed above and allows admission for up to 4 children, accompanied by an adult. Additional children will be charged at the regular rate of $5 each.